Jobs in the Defense Industry

The mission of the Department of Defense is this: To provide military forces needed to deter war and to protect the security of our country. With headquarters at The Pentagon in Washington, D.C., the Department of Defense provides job opportunities throughout the United States and world. There are those that are active in the Army, Navy, Air Force, Marines, Coast Guard and Reserves, and then there are those that work in the private sector in homeland security jobs. The Homeland security and safety as well as the ongoing war in Iraq and conflict in the Middle East – as well as the threat of terrorism worldwide – has created more demand than ever for jobs in the defense industry. 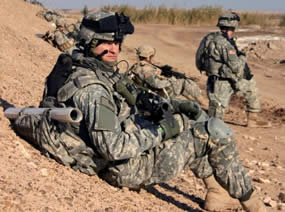 But not all defense industry jobs are in the military, and many good jobs are in the private sector with government contractors who help support the needs of America’s military.

The types of jobs within the defense industry include:

A career in the military can be a gateway to learning new skills, becoming a leader and positioning one for success in future careers – in or out of the military. There is a dangerous side to any job in the military, especially if one has to go to war. As long as their worldwide conflict there will be need for workers in the defense industry. Even if fewer soldiers are on active duty, there will still be a need to protect at home and across the world at war or not.

There are civilian jobs with defense contractors such as Lockheed Martin, National Security Agency, General Dynamics Information Technology, National Geospatial-Intelligence Agency, The Tauri Group and Verizon,, to name a few.

America’s military personnel are some of the most highly-trained and skilled professionals. It takes more than just boot camp to prepare one for the rigors of life in the military. The training provided goes beyond training for war or conflict. The training learned in the military can apply and be used for a lifetime and carry over to a number of different industries. Many military personnel will transition, however, into private sector jobs that tie into their military background – law enforcement, private investigation, working with the FBI or CIA, DEA, border patrol, ATF or perhaps NASA.

Other civilian defense industry jobs can require high-level training with a Bachelor’s Degree a minimum requirement. Those looking for work in the defense industry must pass background tests, psychological tests and other tests selected by the organization doing the hiring. Because weapons or highly-confidential information may be involved, defense industry workers go through a rigorous hiring and selection process.

Technology has taken over the world, and those with a high technical aptitude can find key positions in logistics and intelligence and electronics, engineering and software.

The earnings of America’s military varies greatly based on years of service and can range anywhere from $1,500 to $118,173 for officers and enlisted personal. High ranking military officials can make well over $100,000 and more, pending again, on years of service and other factors. According to the Bureau of Labor Statistics compensation for regular military employees was $33,739 for a single enlisted member (low end) to $118,173 on the high end (2013 data used).

In addition to salary, there is the Montgomery GI Bill, which provides money towards a college education. There are also programs such as the ROTC (Reserve Officers Training Corp) that helps military personnel pay for and obtain an education while providing military service. 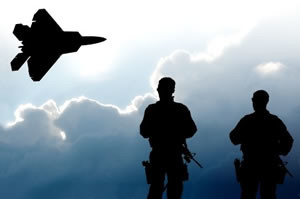 The world is facing more conflict than ever before, and the United States Government is putting as many resources as possible into protecting our country and supporting the military and defense needs throughout the world. There will always be an opportunity to find a career and work in the military. Military jobs not only offer security, but they have outstanding pensions and lifelong opportunities. However, these jobs can be dangerous, keep one away from home for highly-extended periods of time and put one in remote locations around the world.

One thing is for certain, while this industry may have its ups and downs and face changes – it’s going to be a needed and important industry now and forever.